During twenty-second stage of the GR 1 Transversal Trail you will cross the serra del Montsec – from the N slope to the S slope – where you will enjoy extraordinary views of the Conca de Tremp and the countless ridges and mountains of the Baix Pallars and Alt Pallars. The route consists of two very distinct parts: during the first part of the stage, you will ascend from the Hostal Roig to the Portella Blanca, a natural pass that will take you across to the opposite slope; the second part is a steep descent across a rocky demanding terrain, from the Portella Blanca to the abandoned village of Rúbies, and then a gentle pleasant descent for a pretty path the will lead you down to the Camarasa reservoir.

Considerable. Derived from the distance and ascent to overcome.

Water is not easily accessible during this stage. There are a number of fountains along the way, but they may be dry. This should be kept in mind when planning for this stage.

Sleeping in the open or tent camping near the Camarasa reservoir. For more information, see: www.montsec.cat (tourism website for la Noguera).

At the old station in Àger (0:30 following GR 1 from the Camarasa reservoir, see stage 23) you will find the Vagons d’Àger, a facility managed by the Fundació Catalana de l’Esplai, which offers 44 beds (for more information, see: https://fundesplai.org/ca/albergs-i-cases-de-colonies/vagons-d-ager, 934 744 678)

This stage does not cross through any villages or inhabited areas. This should be kept in mind when planning for this stage.

We begin this stage at the (1) Hostal Roig (0:00 - 1,095 m). Beginning from this old abandoned inn, take the track that heads S-SE. You will pass the old Corral del Petit and the Corral de l’Hosteler; the latter is located a few meters beyond the path. Take a narrow path that breaks off to the right and which serves as a shortcut to a crossroads, situated in a small pass (1.149m). At the crossroads, you will reconnect with the dirt path where you began the stage, which you will now begin following again.

Walk uphill. You will pass two ravines and come to a (2) sharp turn to the left (1,316 m - 0:55). At this point, you will leave the track for a moment and take a narrow path that breaks off to the right (SW), which serves as a shortcut. You will rejoin the track a few hundred meters above. On the left you will pass the path that leads to the Tossal de Mirapallars. Continue straight ahead. Pass the ravine of la Llau de la Coma del Torn and continue to the West until you reach the fork leading to the Ice Cave (on the right, marked). If you have enough time and are up for it, it is really worth a visit!

Continue the stage along the track. As you ascend, the views of the Pallars are increasingly open and spectacular. After about 650 m you will pass a fork on your right that leads down to the lovely sanctuary of Sant Salvador del Bosc. Continue straight ahead (O) and you will finally arrive at the (3) Portella Blanca (2:40 - 1,414m), a natural pass that will let you cross over the Montsec de Rúbies. For the first time in this stage you will be able to the la Noguera (S) and the old village of Rúbies, the next reference point on your itinerary.

Descend from the Portella Blanc following a lovely narrow path. As you descend, the path will become rockier and more irregular. You will follow a few zig-zags, a flank to the left (SE) and a rather steep final stretch until you reach the abandoned village of (5) Rúbies (2:45 - 1,146 m). In the next stretch, you will be changing paths frequently. A number of different tracks and narrow paths will take you toward the West, until you get to the bottom of the Rúbies ravine. Cross the ravine and continue on a track (O) that will take you to the (6) Meià Quarry (3:30 - 876 m). From here you wall have marvelous views of the S face of the Tarradets canyon, with its spectacular walls, including the well-known Roca Regina.

You will pass the old quarry and the ruins of the Cases de la Pedrera. You will reach a track that you will follow to the right for about 200 m. Then take a narrow path (left) that provides a shortcut, crossing over the track a few times. Finally, follow the same track for the final stretch until you reach the intersection of the roads C-12 and C-13, directly adjacent to the (7) Camarasa reservoir (4:45 - 349 m).

Reaching the Portella Blanca pass and looking out over the great expanse of the land all the way to the horizon.

The splendid views over the Terradets canyon and the Àger valley during the descent from Rúbies to the Camarasa reservoir.

Enjoying the solitude and silence in the abandoned village of Rúbies, as you take in the lovely hermitage of Santa Maria.

The serra del Montsec is the chief mountain system in the Pre-Pyrenees of Lleida. It is 40 km long and is divided into three subunits, from east to west: the Montsec de Rúbies, the Montsec d'Ares and the Montsec d'Estall. Its highest point is the Tossal de les Torretes, with an altitude of 1,677 m.

Visiting the ice cave (Cova de Gel). The name comes from the ice that can be found in the cave throughout most of the year, due to the intense cold in its interior. To get to the cave, there is a narrow marked path that leaves the GR 1 trail (trail sign and yellow markings), which will take you to the spectacular entrance of the cave in about 20 minutes.

The route for this stage is very exposed to the sun. If you are travelling during the summer months, it is important to drink plenty of water and protect yourself from the sun to prevent sunstroke. 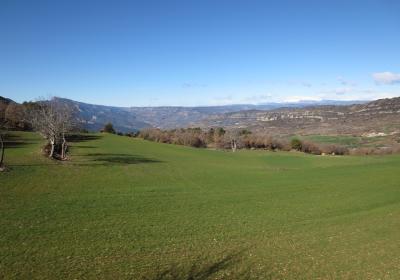 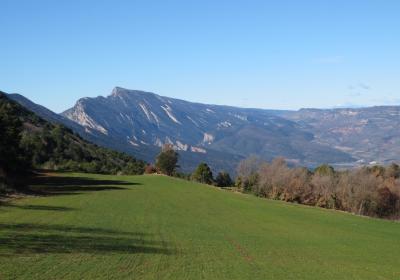 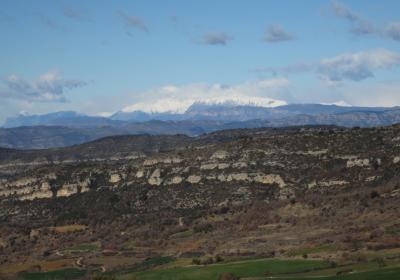 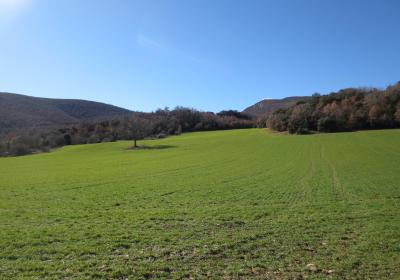 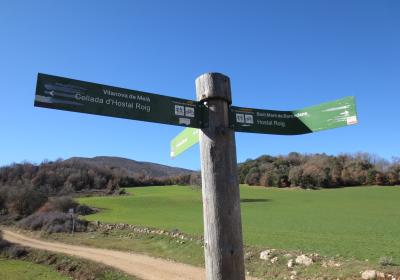 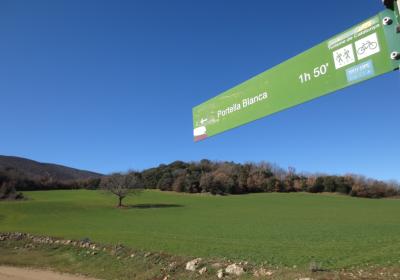 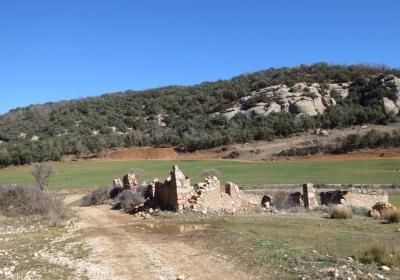 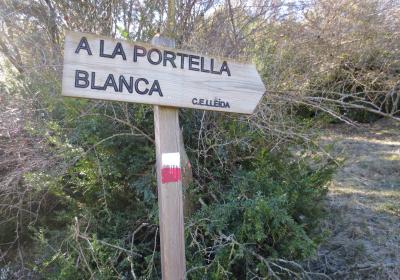 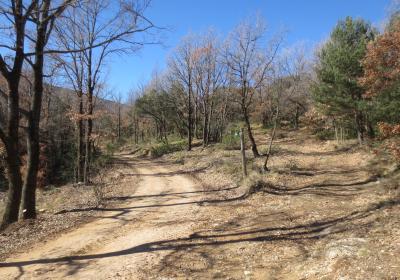 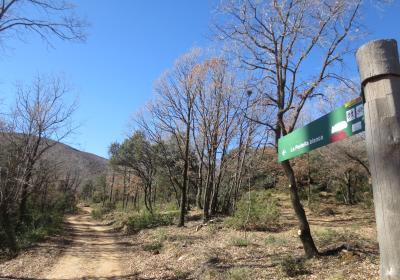 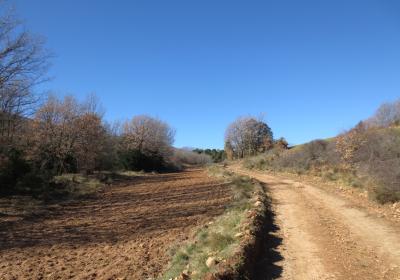 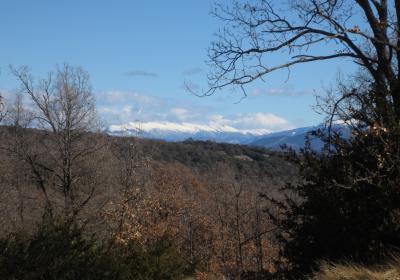 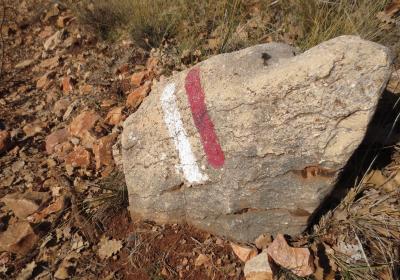 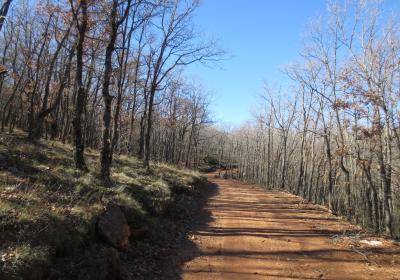 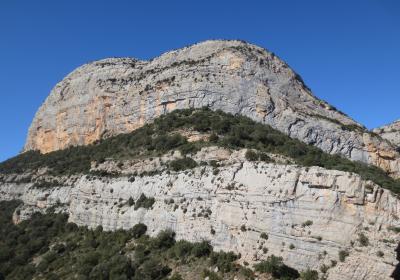 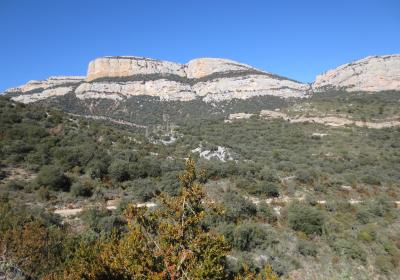 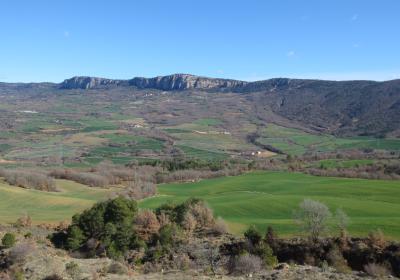 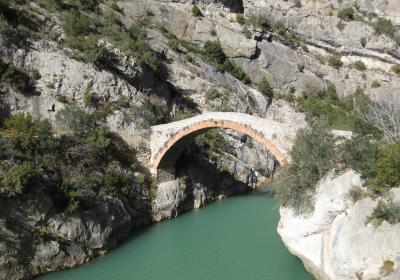 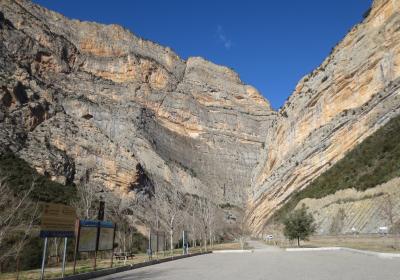 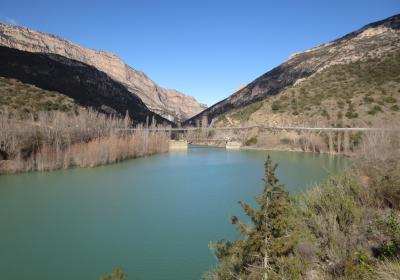